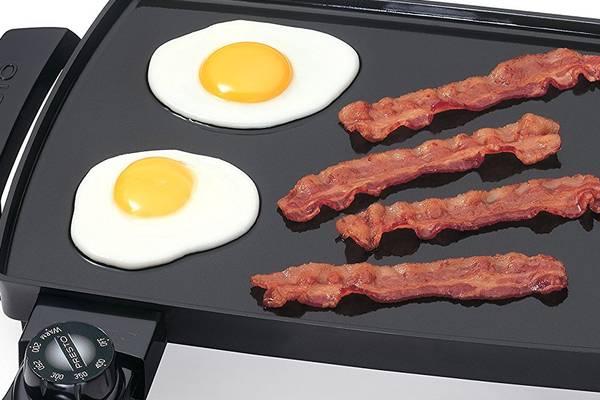 The Presto 07211 Liddle Griddle is a scaled down model from their popular electric grill range. It's a convenient way to cook and keep warm all kinds of hot food, reduce fat and oil consumption and have fewer pans to clean up afterwards. 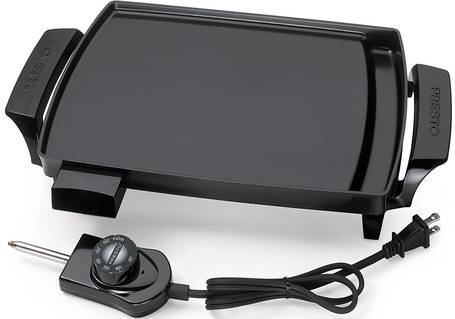 It has a nonstick cast aluminum cooking surface 11 by 9 inches, and a tiny countertop footprint just an inch or so bigger than that with the cool touch side handles and drip tray, and the temperature control that attaches to the front.

Despite its compact size the Liddle Griddle is a full featured electric griddle, with built in drip tray and rotary heat control for selecting and automatically maintaining temperatures up to 400 degrees Fahrenheit.

The Liddle Griddle is a compact unit that's easy to stow away in a closet (or keep ready without taking too much counter top space.) According to reviews there's enough grilling space to make breakfast for two people. For larger numbers than that, or batches of pancakes, you may prefer to consider a larger griddle.

The Liddle Griddle makes a likeable and extremely compact electric grill that's ideal for two-person households. It'll just fit two French toast slices on one side, leaving the other side free to cook two eggs or make enough bacon for two. Or it'll handle two steaks side by side and heat up to an accurately measured 400 degrees to cook them to perfection. 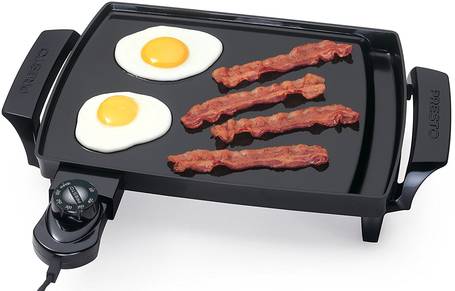 There's a permanent gentle slope to drain grease and fat into the channel, which is good for reducing fat intake. But if you want to cook on a perfectly level hotplate, or fancy the option of switching between flat and tilted, then consider a different model, including some of the larger Presto griddles.

Not being able to remove the drip channel was inconvenient for some users, especially when it soon filled up with fat and grease from cooking meat, and there was a need to empty it while still cooking.

The Presto Liddle Griddle is priced competitively but comes with a high-quality cooking surface that according to buyers cleans easily and lasts a long time before the non-stick qualities begin to fade. The side handles are a somewhat cheaper design and several owners had problems with them cracking or breaking. It seems they may not withstand accidental damage.