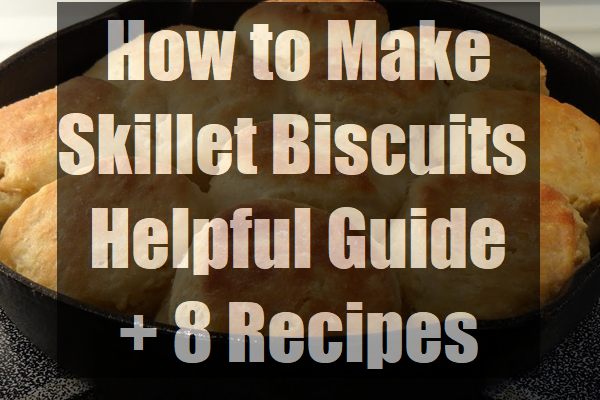 What are Skillet Biscuits? If you’ve never tried a skillet biscuit, you’re missing out. These tender, flaky, golden-brown bites of perfection make the ideal breakfast, lunch, dinner, and anything in between. Top with butter and a spoonful of jam to make your morning start with a bang, smoother them with sausage gravy for a sustaining midday meal, or pair them with a hearty beef stew for a comforting supper.

How to Make Skillet Biscuits

With a little know how, making skillet biscuits is a breeze. You can still use the same dough recipe as you would normally (you can even use a pre-made, store bought version if you want to make things super-easy on yourself). The only real difference between making these beauties and their oven baked equivalents is that you’ll be using a skillet as your baking tool, rather than a cookie sheet.

How to Make the Easiest Ever Homemade Skillet Biscuits 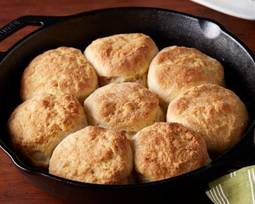 There’s 101 ways to make skillet biscuits, but if you’re looking for the quickest, easiest, most foolproof method, try this simple, 3- ingredient recipe. Your taste buds will thank you for it, I promise!

Tip: Add a sprinkling of sea salt to the finished biscuits for extra “Yum”.

Can I Bake Biscuits in an Electric Skillet? 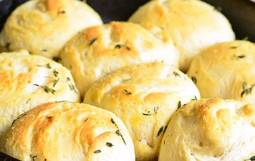 An electric skillet is an incredibly versatile device, and can be used to bake all sorts of goodies, from cornbread to cookies, from cakes to biscuits. You’ll need to make a few adjustments to the skillet before you start cooking, but once these are done, you’ll be able to whip up your favorite biscuits in no time.

How to Make Biscuits in an Electric Skillet

You won’t need to make any changes to your usual recipe when you make biscuits using an electric skillet. You will, however, need to make a few adjustments to the skillet itself. Grab a wire rack and a baking tray, and get ready to cook:-

These buttery, light- as- air biscuits can be whipped up in less than 15 minutes. The secret to their fluffiness? A can of Sprite….

Tip: If you can’t get hold of Sprite, a can of 7-up will do just as well

Tip: if you’re all out of buttermilk, make you own by combing 1 tbsp of vinegar with 1 cup of milk. Let it sit for 5 minutes and voila… DIY buttermilk!

Is there anything as delicious or comforting as homemade cheddar biscuits smothered in tasty sausage gravy? If there is, I don’t think I’ve tried it….

While the sausage gravy rests, start preparing the biscuits

Tip: If you want to speed up the process, use a food processor during steps 1 and 2 of the biscuit prep. Pulse in short bursts to avoid over mixing; the consistency should be coarse and crumbly.

The Best Skillet Biscuits Without Buttermilk

If you’ve run out of buttermilk but are dying for a biscuit, don’t panic. This recipe will give you an out- of- this world taste sensation without requiring even a drop of buttermilk in the making.

2) Combine the dry ingredients in a bowl

3) Knead the butter into the dry mix, using your fingertips to ensure an even distribution

5) Turn out the mixture onto a lightly dusted work surface

6) Use your hands to pat the dough into a rectangular shape around ½ inch thick. Fold the dough in half, flatten, and fold again. Repeat

7) After the third fold, pat the dough into a ¾ inch thick rectangle. Cut out the biscuits

8) Arrange the biscuits in the pan. Pack them in tightly: the closer they are, the less they’ll spread. The less they spread, the taller they’ll rise!

Tip: wipe the cutter down with a paper towel after cutting each biscuit. This will ensure a neat, clean round and help give the biscuit a better rise.

On your next camping trip, be sure to whip up some camping skillet biscuits… your tent- mates will love you for it!

2) Melt the butter in the pan with the onion salt, garlic salt and paprika

3) Prepare the dough by combining the baking mix and water

5) Cut the dough into biscuits

6) Add the biscuits to the skillet, flipping as you add them to ensure both sides are coated in butter

7) Cover the skillet with a sheet of aluminum foil, and leave to cook for 10 minutes. Remove the foil and cook for a further 5 minutes, or until golden brown

8) Once cooked, allow the biscuits to rest for 5 minutes before tucking in

Tip: If you forgot to bring a biscuit cutter, a drinking glass will do just as well.

Can You Cook Biscuits on a Griddle? 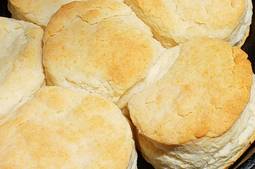 When you want a warm, tender, flaky biscuit, reach for the griddle. Cooking biscuits on a griddle is one of the easiest, simplest cooking methods available … trust me, once you’ve tried a biscuit fresh from the griddle, you’ll never go back to baking trays again!

Key Tips for Cooking Biscuits on a Griddle

For the best griddled biscuits you’ll ever eat, just remember a couple of key tips:

Why a Griddle Makes the BEST Biscuits

If you fancy cooking up a batch of tasty biscuits, a cast iron griddle is the way to go about it:

Ready in Minutes: Thanks to its fabulous heat conducting properties, a cast iron griddle heats up quickly and evenly, resulting in perfectly baked biscuits each and every time.

A Perfect Rise: for the best rise, biscuits should be baked without any space between them. This helps them “pull” each other up, resulting in tall, fluffy mounds of deliciousness. A griddle pan is the perfect appliance to ensure a tight, closely packed bake; with nowhere for the biscuits to escape on the sides, they only thing they can do is rise!

Crispy AND Tender: The hot base of the griddle will crisp up the bottoms of the biscuits in no time at all. Meanwhile, the edges will stay beautifully flaky and tender.

How to Cook Canned Biscuits on a Griddle

If you’re in need of a quick, warming breakfast, try these Fried Canned Biscuits. Eat them sweet with maple syrup, or add a savory twist with sausages and gravy.

Tip: If you’re making these in advance, wrap them in aluminum foil to stop them drying out. When it comes time to serve, sprinkle with some water before warming them up in the oven or microwave.

How to Cook Fried Biscuits on a Griddle 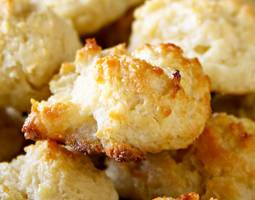 Nothing beats a fried biscuit straight from the griddle. Top with honey for an easy- to- make, meltingly- delicious sweet treat.