I like eggplant. The reason for that opinion is that I've found it to be very nutritional and it has lots of health benefits. Whenever I can I try out new eggplant recipes to further the taste of the vegetable.

Cooking Eggplant on a Griddle 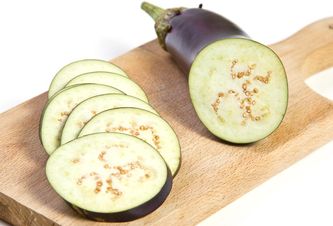 To cook eggplant one delicious way, I found that cooking them over a griddle to be the easiest way. The griddle provides great heat, low sides for better mixing and better temperature control.

To find out the facts behind cooking eggplant on a griddle, just continue to read our article. It is filled with the information you need to know to cook eggplant right.

How to Griddle Eggplant

There are several good steps I take when cooking eggplant on a griddle. First, I slice the eggplant into thin pieces. Then I brush the slices with olive oil. Olive oil shouldn’t be poured directly on the griddle.

The oil will pool and affect the flavor of individual slices of eggplant. Next, I allow the eggplant to caramelize before flipping the individual slices. Then I wait to see the golden color before removing from the heat.

Should Eggplant be Peeled 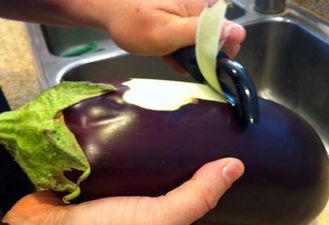 Not always. When the eggplant is a bit older it is a good idea to peel it first. The reason for this is the older the eggplant the tougher the skin. The tough skin can ruin the flavor and texture of the dish.

I find that young eggplant’s skin to thin and tender. The skin should not be peeled in this situation as that tender skin adds texture to the vegetable when cooked.

Should I Remove Eggplant Seeds

I found that it is a good idea to remove the seeds from the eggplant before cooking it. Eggplant is a member of the nightshade family tree. Many vegetables of this family tend to have bitter tasting seeds.

When I removed the eggplant seeds I found that my eggplant dish tasted far better than it had before. You do not have to remove the seeds but if you want to improve the taste of your meal, it is a good idea to do so.

Should I Salt Eggplant Before Cooking 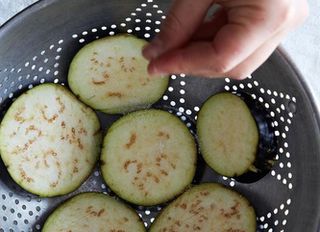 Salting is not necessary before you cook eggplant. I have found over the years that salting is only good if you are trying to cook an older eggplant. The salt doesn’t really change the flavor but helps our perception of the vegetable’s taste.

If you want to salt, cut the eggplant into the size and shape the recipe calls for. Then place the pieces in a bowl and be generous with the salt. I let it sit for an hour before rinsing the salt off.

What Happens When you Salt Eggplant

In my experience I found that salt does not really remove any bitter taste from eggplant. That is because salt brings a bitter taste to any food it touches. If you try salting eggplant to get rid of its bitterness, you are only adding more bitter taste to the vegetable.

Trying to salt an eggplant adds too much time to the cooking process.

How do you Cook Eggplant Without Getting Soggy 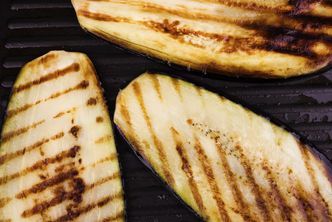 As you may know, eggplant can soak up a lot of oil very quickly. The culprit for this is the eggplant’s cellular structure. The air pockets just drink up the oil. There are 4 good ways to avoid having soggy eggplant:

How to you Cut an Eggplant for Griddling 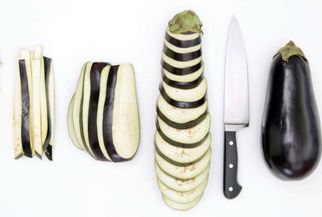 A lot will depend on the recipe you are following, yet I have found that there are 3 good ways to slice an eggplant when you are getting ready to griddle the vegetable. First, you can dice it. This gives you small pieces that cook thoroughly very quickly.

Second, you can cut the eggplant into medallion shaped pieces. Third, you can make long strips of your eggplant and place those strips on the griddle. In all cases, just make sure you remove the stem and the flower before you cut.

Why is my Eggplant Tough

What makes the eggplant tough when you cook it, is thew actual cooking method itself. I have seen chefs use too large of an eggplant, ones that are too old, then they do not cook the vegetable long enough. An under cooked eggplant should always come out a bit tough.

Keep in mind that eggplant is fickle and it takes years of practice to cook this vegetable just right.

How do you Get the Moisture Out of Eggplant

The best technique I have come across is to slice the eggplant into thin pieces then place them on a cookie cooling rack. Salt one side first and let the salt draw a lot of the moisture out.

When that is done, I flip the eggplant slices over and salt the other side. Then I place the slices between two flat plates and squeeze the rest of the moisture out. After I do that I rinse the salt off and get ready to cook the eggplant.

Can you Cut Eggplant Ahead of Time

No, not really. If you are cooking the next day and want to cut your preparation time down, then I would not advise cutting your eggplant ahead of time. The vegetable browns very easily. The browning does not affect the taste, just the presentation.

I recommend that you only cut a few hours ahead of your cooking time. Then store the cut pieces in cold water and place the bowl in the fridge. This will stop the browning of the exposed sides of the vegetable.

Here is a recipe I enjoy

Griddling eggplant needs to be done with care. The vegetable is a finicky plant that takes a lot of practice to cook it just right. While everyone has their preference, the above information should guide you to creating perfect eggplant meals.

10 Easy Tips for Cooking Cod on a Griddle