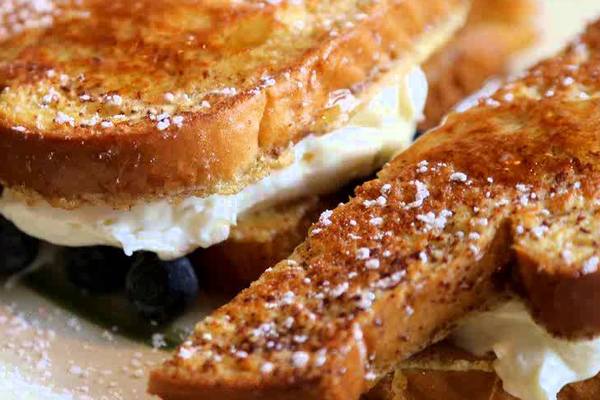 Easy Tips For Cooking French Toast on a Griddle 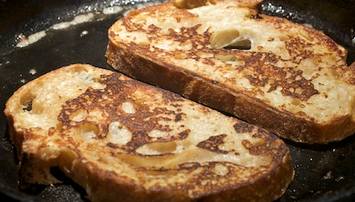 Can you make french toast on a griddle?

If you have any type of griddle, you'll be glad to know that it is easy to use it to cook French toast. This is true whether your individual model is stove-top, flat top or even electric. Furthermore, you can also cook electric skillet French toast. 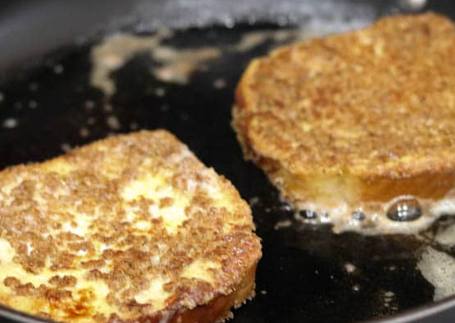 How To Make French Toast on a Griddle

To make French toast on a griddle, you need to soak bread in a mixture of beaten eggs and milk. Allow 1/4 cup of milk for every beaten egg. This will make about 4 standard-sized slices of French toast.

On a medium-high griddle, heat a drizzle of oil. Then, cook the French toast for a couple of minutes on each side until it's golden brown. You can also use a frying pan or electric skillet for this purpose. 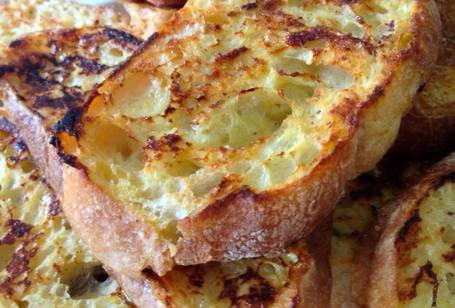 Many people like to use a variety of flavourings such as cinnamon in their French toast, and popular toppings include yoghurt, fruit and syrup. In the UK, French toast is often served savoury without any sugar as an accompaniment to a cooked breakfast. We'll discuss what makes the perfect French toast, and the different variations you can try, later in the article. 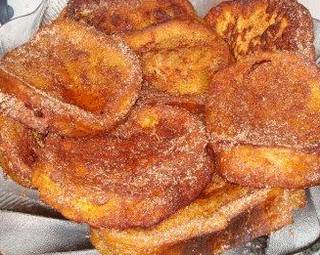 How do you make fluffy French toast? 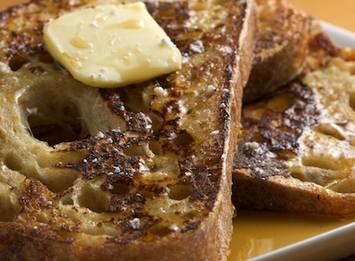 How many eggs do you need to make French toast?

The golden rule is to use one egg for every 4 pieces of thick French toast you want to make. For each egg, allow about 1/4 cup of milk. As we mentioned above, you can also add flour to make your French toast more fluffy.

How dry should bread be for French toast?

Using dry bread for French toast is a great idea, because it prevents sogginess from developing in the centre. Bread that is the ideal dryness for French toast should feel like stale bread, and slightly stiff.

How to dry out bread for french toast?

If you want to dry out bread to make the perfect French toast, there are a couple of methods you can try. If you're organised, you can leave your bread slices laid out in the air the night before. By the time you wake up for your breakfast, the bread will be nice and dry. If you want to dry bread to make French toast quickly, put your bread slices in the oven on a very low heat for about 15-16 minutes, turning halfway through. Check every now and then to check they are not burning. 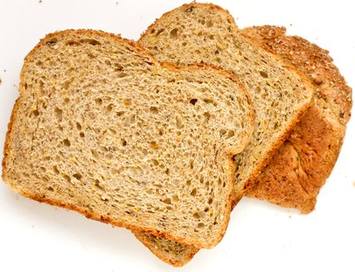 Stale bread is a great option for French toast as it is already nice and dry. Also, it is a great way to use up bread that's past its best without wasting it. However, check your bread carefully first to make sure that it has not developed any mold.

How long do you soak bread for French toast?

To make perfect French toast, you'll want to soak the bread until is it fully saturated with the egg and milk mixture. Around 1 minute on each side is ideal, but allow a little less time if you are using thinner slices. 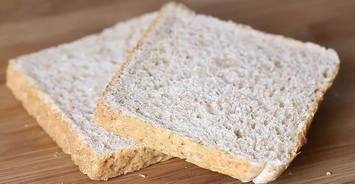 What is the best bread to use for French toast?

You can use a variety of breads to make French toast, although wholewheat options will have a very different flavour. Unless you don't eat it for health reasons, it's really best to use white bread to make French toast. You want a bread with a spongy texture, so it can absorb the egg mixture properly. Also, you will need to pick a bread that is nice and sturdy, or it will fall apart when you soak it. A bread like brioche is ideal for making French toast. Read on for more information about the best breads for French toast. 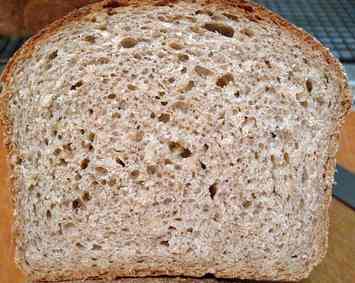 Thick bread slices are ideal for making French toast, as they will stand up to being soaked much better. Slices around 3/4 of an inch to an inch thick are ideal, because they will be sturdy enough to withstand the soaking but thin enough to cook through properly on a griddle.

French toast will work really well with sourdough bread, as sourdough generally has a sturdy and strong texture. However, remember that sourdough has a distinctive flavour that not everyone likes. If you love the taste of sourdough, then you'll probably love sourdough French toast. 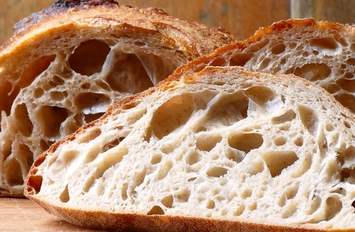 Can you make French toast without using milk?

If you don't like to use dairy, or are lactose intolerant, you may be wondering if you can skip the milk when you're making French toast. The good news is, it's very easy to make French toast without dairy. You can simply omit the milk from the recipe (unless you're using a flour-based batter.) However, be aware that this will give your finished French toast a more dense consistency. 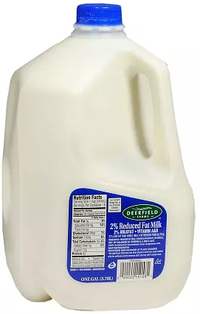 Alternatively, you can simply replace the milk with a dairy-free option. Soya, almond, rice, oat and even coconut milk all make good alternatives and can still result in really yummy French toast.

Can you use evaporated milk in place of milk for French toast?

Can you put nutmeg in French toast?

If you like the flavour, you can add a little grated nutmeg to your egg and milk mixture or your batter before you dip the bread in. Also, nutmeg and cinnamon go beautifully together, so a sprinkle of cinnamon can be a nice addition as well.

Why is my french toast soggy in the middle?

There are a few reasons why your French toast might be soggy in the middle:

Can you put french toast in the fridge?

If you make too much French toast or you want to make it in advance, you can keep French toast in the fridge. To keep it safe to eat, you should put it in the fridge no more than 2 hours after you cook it. Also, you will need to wrap the French toast in foil, cling film plastic wrap or a sealable food bag. This will prevent your French toast from drying out, which will affect the flavour and texture.

How long can you keep French toast in the refrigerator?

As it contains egg and milk, you can't keep French toast in a refrigerator for that long. It will still be safe to eat for a couple of days, as long as you keep it wrapped up and it was refrigerated within 2 hours of cooking.

Can I make French toast and freeze it?

As an alternative, if you want to make your French toast well in advance you can cook it and put it in the freezer to eat at a later date. In fact, many people feel that French toast cooked from frozen has a better flavour and texture than French toast that's been stored in the refrigerator. Allow your French toast to cool properly before freezing, but don't leave it out of the freezer for any longer than 2 hours.

Also, make sure it is securely wrapped to prevent freezer burn. A sealable freezer food bag is the ideal wrapping for frozen French toast. While you can keep food safely in the freezer for a long time, about 1-2 months is best for French toast. Any longer will affect the flavour and texture.

Can you freeze French toast batter?

You can, although it's so quick to make French toast batter that you probably won't save that much time by making it ahead. However, if you have leftover batter or want to use up eggs or milk before they turn, you can freeze the batter just fine. Like any other food, make sure you place it in a tightly-sealed airtight container.

Is French toast good or bad for you?

This really depends on how you make your French toast. Bread contains a lot of carbohydrates, so may not be a good choice for those following a lower-carb diet. However, eggs and milk are not especially high-calorie and have a good protein content. Also, bear in mind extras that you are adding to French toast. Using condensed milk will considerably increase the fat, sugar and overall calories in French toast. Also, adding toppings such as sugar or syrup will up the calories and of course the total sugar content. So, French toast is probably fine for most people in sensible portions, with sweeter additions best saved for a special treat.

Is French toast from France?

Despite its name, French toast in one form or another actually can be traced back to the Roman Empire. The name may refer to it's enormous popularity at French court in the 15th Century, when it was called 'pain perdu' (lost bread). Alternatively, legend has it that French toast as we know it today was actually dreamed up by a cook called Joseph French in 1774. The story goes that he intended to call it French's toast, but his awful grammar led to the misnomer. While we love this story, the real origins of the name are not entirely clear.

Hopefully after reading our handy article, you're now ready to start making delicious French toast on a griddle. Whether you use a traditional egg-milk mix or a flour-based batter, delicious, fluffy French toast is just around the corner. Bon appetit!