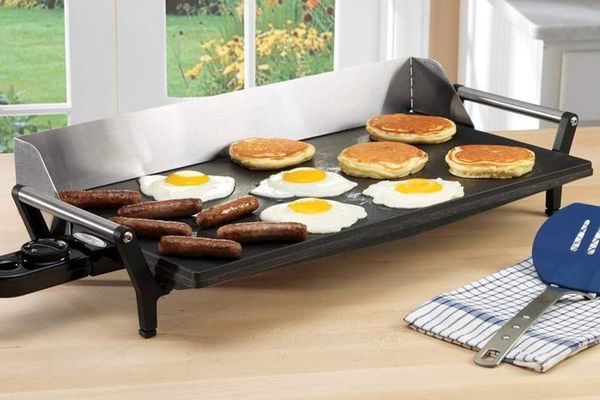 Large electric griddles are essential components of any serious culinary perfectionist or those who like to entertain large groups of people with succulent and savory foods that are perfectly cooked and beautifully prepared. That is because of the temperature versatility and extensive cooking space that these griddles provide.

Simply put, large griddles have a large metal plate that can cook multiple foods at various temperatures. The biggest differentiating factor between different models of large electric griddles is the thickness of the metal plate – simply because it is the key factor that determines how well the large griddle performs. Some people prefer the thick plates because they retain more heat efficiently and are more durable as they are less likely to warp. But others prefer thin plates because they are able to reach their intended temperature quickly thereby consuming considerably less energy. 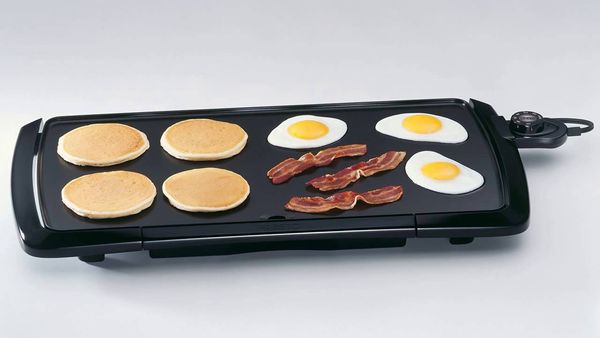 Large griddles are usually constructed using cast iron or even polished steel, with occasional models using aluminum. Cast iron metal plates are perfect for cooking food that should be crispy, whereas aluminum and polished steel plates deliver a significantly better distribution of heat. Regardless of its construction and design, there are two different powering options for large griddles: gas or electricity- with the focus of this article on electric models.

The electrical elements that are responsible for providing the distribution of heat to the griddle top are usually positioned underneath the griddle, mostly in increments of 12 to 24 inches. These heating elements are many times thermostatically controlled, with customizable configurations that will allow you to create specific heat zones across the surface of the griddle so that you can cook and prepare a multitude of different dishes that require a varying temperature settings.

One thing that is great about large griddles is that they are usually very versatile in its compatibility with the equipment that you already have, which allows you to expand your personal menu and be able to improve upon the dishes that you cook frequently.

Before anything else, I just want to answer a simple question asked for most of the readers of this guide:

What is the largest electric griddle available in the market?

Well, after researching for the biggest electric griddle we found the Costway Electric Teppanyaki Table Top Grill Griddle. It has an impressive 35" x 9" large cooking area. You can cook almost anything for a large crowd with this giant electric griddle. Click here to check latest price or read more >> 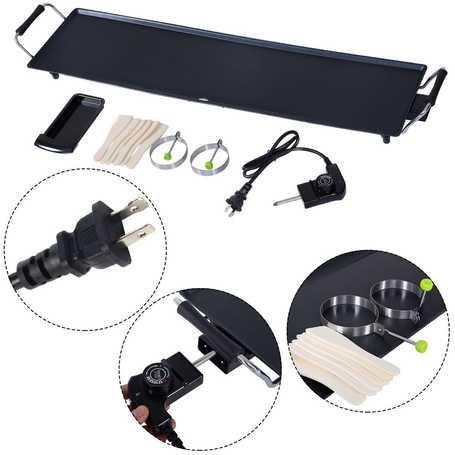 What To Look For In A Large Electric Griddle

When the time comes that you are ready to select the the perfect large electric griddle for you, there are some considerations that you must make prior to making your choice of the model that you want. If you blindly attempt to just pick the most expensive model, or the one that is the least expensive, you may regret it, as it may not even have the features that enable you to do what you intended to do in the first place.

The thickness of the plate of the large electric griddle will determine the level of heat retention as well as heat distribution that is delivered to the food when use. Thick plates are between 1 in and 1 1/2 in, whereas the plates are between 3/8 in and ¾ in. Those who prefer thick plates enjoy the benefit of a superior retention of heat and a noticeably even distribution of heat. The thick plates are great for grilling frozen meats, as frozen meats need to be cooked a special way in order for them to turn out evenly cooked. Thin plates have the ability to heat up quickly and recover heat more rapidly than thick plates, which means they ultimately consume less energy. The downside of thin plates is that the distribution is not as evenly distributed, and the surface of the griddle may begin to warp when exposed to high temperatures during preheating. But all in all, thin plates are very useful for delicate items such as eggs, pancakes and bacon

When the more crucial considerations would be the size of your electric large griddle, as the first thing you should consider is the amount of food that can be prepared at one time. Determining that accurately is the difference between owning a large griddle that keeps up with your pace, and having one that actually slows you down.

The entire point of having a large griddle is the heat that it delivers. What you want is a griddle that warms up the perfect way that you need for the types of foods that you cook and serve. During the process of comparing, you will find that many of the griddles manufacturers boast about their model having a high BTU, and this is how you know whether or not you want to get a unit that produces a lot of heat or not. But because different food have to be cook different ways, with some requiring low heat for simmering, and others requiring high heat for fast cooking, start with considering the types of food you intend to use unit for, and then from there, deciding which units would best serve all of your other needs.

When it comes to large electric griddles, there are two different types of control options available. Manual controls and thermostatic controls are different in various ways, and can make the difference and choosing the right model or not. Manual controls usually allow you the capability of only utilizing a limited amount of heating settings, which usually include low, medium and high. On the other hand, thermostatic controls give you the ability to manipulate the heat specifically by temperature. As one would quickly assume, thermostatic large electric griddles are more expensive than those that are operated by mail controls.

Anything that slows you down from being as efficient as you can when you are in the kitchen cooking is a liability, not an asset. If your large griddle is difficult to use and complicated to figure out, then your food will not be prepared in time. The ease-of-use of the electric large griddle that you choose is not an aspect of the purchase that should be overlooked, as failure to consider it may result in a very frustrating, even dangerous situation.

The cost of a large electric griddle can range anywhere from $30 for the most basic model that is smaller in size, some more than $500 for large griddles that have an extensive range of features and superior material construction. Operating a large style kitchen is an expensive endeavor, so it is no wonder that when making the selection, your budget may be a priority. And depending on the amount of space that you need for cooking, having it naturally fit into your kitchen space is another aspect to consider since insulation may require some costly adjustments to your kitchen.

Benefits of a large Electric Griddle

One of the best benefits about using a large electric griddle is that the seasoning of foods that have been cooked often seep down into the material of the griddle. That does not mean that the surface is dirty, but it does mean that the flavor is then transferred into other foods that make them even more flavorful than they are. This unique additional dosage of savory flavor is one of the benefits that draws consumers into purchasing large electric griddles – much like cast iron skillets.

The Broil King large electric griddle features an environmentally friendly coating that delivers a superior experience when it comes to having a nonstick service.

The stainless steel backsplash is removable, with the rear legs assisting with facilitating the right off of grease.

The heat is fully adjustable, allowing you to heat the unit up to 425°F. That is all the while the handles remain cool to the touch.

This electric griddle features a removable grease tray, and can be immersed on the water when the temperature probe is removed. And since the cooking space measures 12.5" x 29" x 5.5", and comes with a two-year warranty. 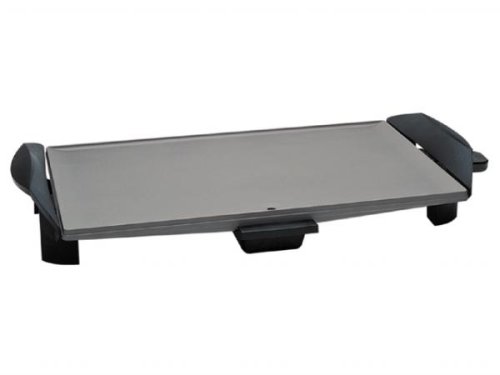 This is a great griddle for those who are looking for versatility and flexibility.

The  top of the Black and Decker GD2011B Electric Griddle is constructed using stainless steel, and its surface offers a very even distribution of heat which is perfect for cooking breakfast items such as pancakes, and eggs and bacon as well as other favorites such as chicken, hamburgers, vegetables and many others.

The 11 inch grease tray is fully removable, and the steel splash guards are extra tall and tapered in the front in order to protect you from grease and spills. 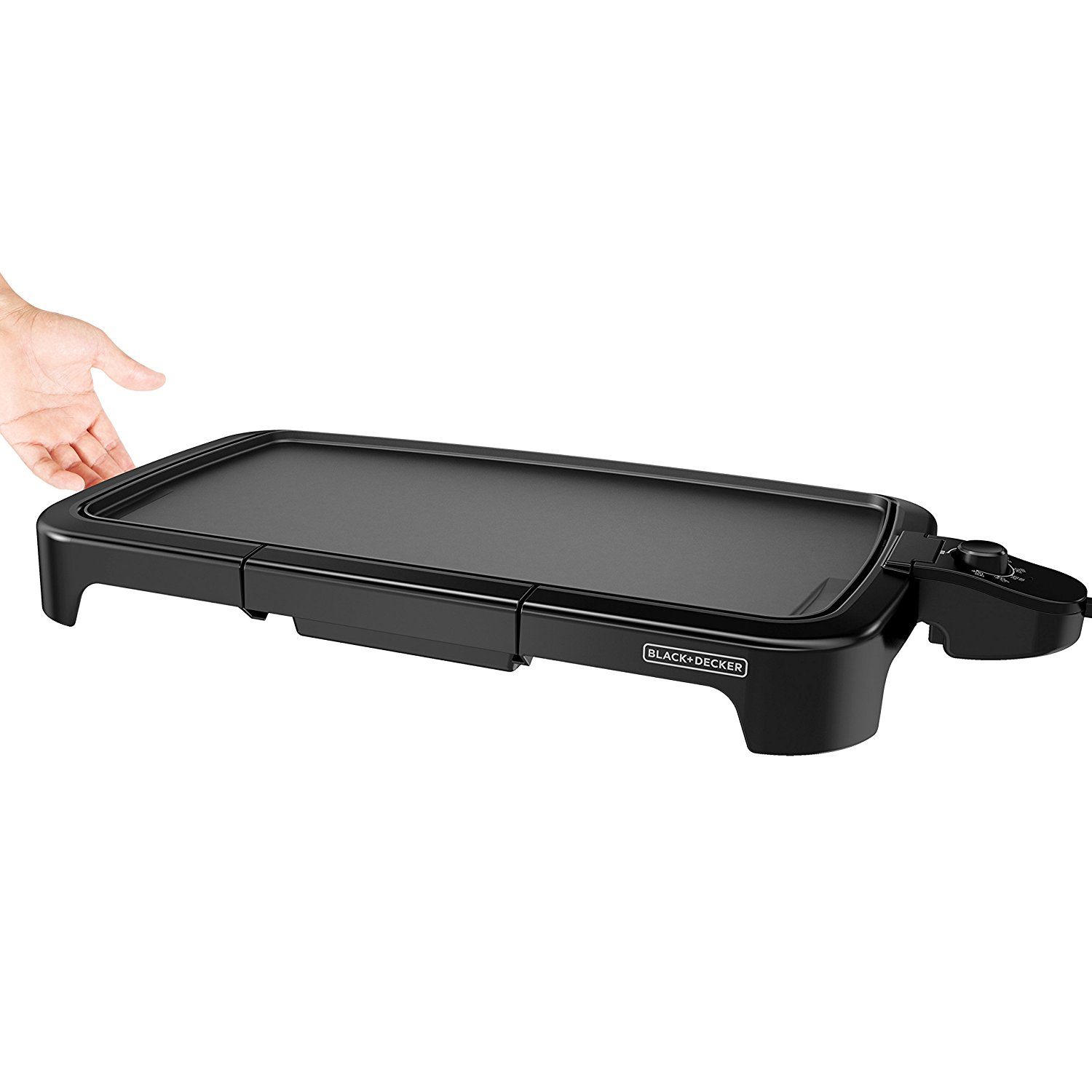 The Black and Decker griddle is a great budget option, it's large enough and has a strong and stable design.

The Presto 07061 22-inch Electric Griddle allows you to cook whatever foods you choose. This particular model is very easy to clean, as the slide out tray that collects grease, the surface and the handles.

The removable handles allows for easy storage, as the unit fits inside a standard 18 inch kitchen cabinet and the handles do not require any tools in order to be removed. Simply open the latch clips that are attaching the handles to the base, and simply secure the latches when you attach the handles again. 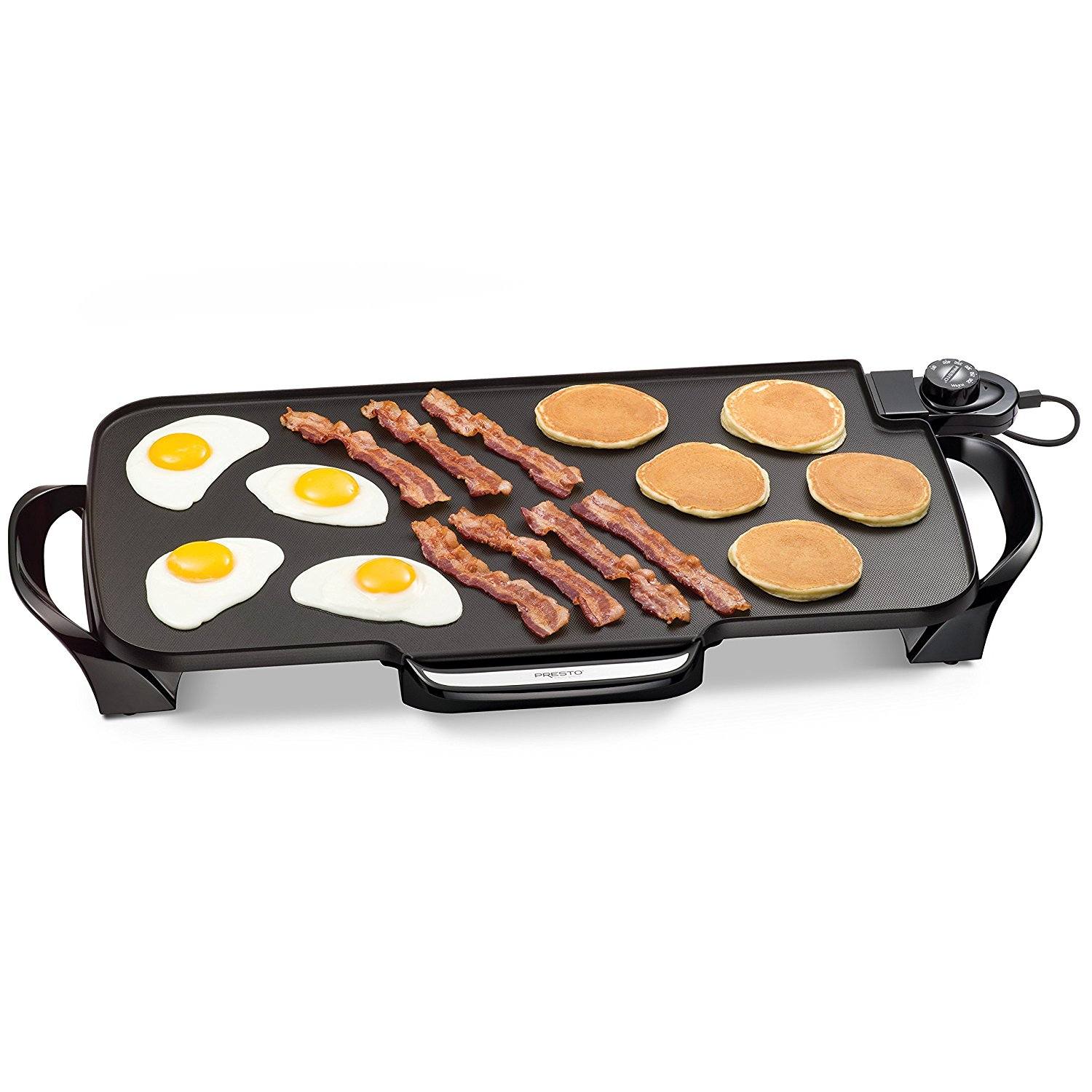 This is one of the most impressive yet largest electric griddle models that you will find anywhere. The rankings are consistently high, it is easy to operate, easy to clean, and it stores easy because the detachable handles.

The Jumbo electric griddle measures 10.5" x 20.5" of cooking surface area, which would allow you to cook large portions of food evenly and thoroughly.

The heavy cast aluminum provides for even distribution of heat without the protective coating warping. That resilience nonstick surface is very slick, allowing for food to slide off easily without sticking to the surface. This allows for very easy cleaning.

The unit is able to precisely maintain cooking temperatures using the control .

The slide out tray allows for grease and oils to be collected in and is removable, which not only makes cleanup easier, but it also helps to remove oil from your food.

Operating is safe as the base is cool to the touch.

When compared to other family size electric griddle options on the market, this big electric griddle is spacious enough to accommodate cooking of large meals. With its safe operation and sleek, nonstick surface that does not warp, and even more, the even heat distribution, there are not many other models that perform as well. This extra large electric griddle comes highly recommended, as it was very well designed.