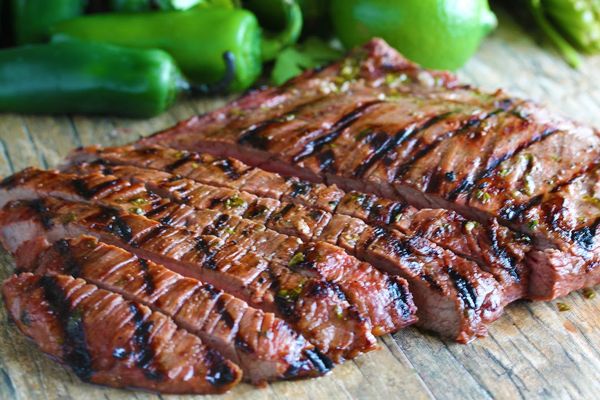 What Kind of Meat is Carne Asada 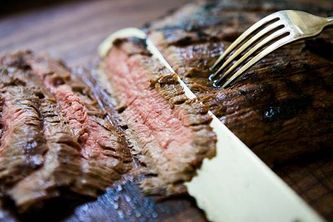 The literal translation of carne asada is “grilled beef”, and in its simplest form, it really is just that: steak, doused in salt and pepper, cooked over a high heat. While you may occasionally see recipes that call for sirloin or tenderloin, traditionally, carne asada is made from skirt or flank steak, two very similar cuts in both taste and texture. While the meats are often used interchangeably, there are a couple of differences between them that are worth bearing in mind when it comes to cooking up your own carne asada. Flank steak tends to be the leaner of the two, with a rich, flavorsome meatiness. Skirt steak has the same intense, almost buttery taste but can sometimes be a little tough. To avoid any unpleasant chewiness, it’s best cooked rare or medium rare at most. Either way, both cuts benefit from being cut in thin slices (but not too thin- carne asada should be tender and thin enough that you can eat it in a taco, but substantial enough that you can enjoy it as a standalone steak) and always cut against the grain, not with it (going with the grain will leave the meat’s long muscle fibers intact, making it tough and rubbery).

How to Season Carne Asada

In Mexico, it’s quite common to limit seasoning to salt (especially when the meat is of the highest quality). When it comes to making your own version, carne asada can be seasoned almost any old way you choose. Some of the most popular seasoning options include chopped dried rosemary, coarse sea salt, fresh or powdered garlic, or even pre-prepared store-bought steak seasonings (certainly the easiest of the options and perhaps the best if you’re looking to whip up something delicious in the least amount of time possible). While seasoning obviously has its place, when it comes to cooking up a real storm, it’s all about the marinade, which brings us nicely around to our next point….

How to Marinate Carne Asada 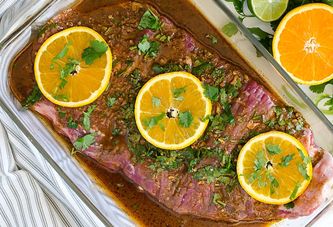 A good soak in some flavorsome marinade can elevate your carne asada to truly exceptional heights. While the range of ingredients that go into the marinade is usually guided by both region and personal preferences, there are some key elements to consider when deciding what to add to the brew. A good marinade will consist of 6 basic types of ingredients, each of which plays an essential role in the three objectives of a marinate: to tenderize the meat, lock-in flavor, and improve surface browning. As long as you include at least one of the options from each of the below items, you’ll be on track to making the best casa asada you’ll ever taste.

Once you know the basic elements of a good marinade, you’re essentially unlimited in the types and varieties you can make. If, on the other hand, you want to stick to the tried and tested Mexican way of marinating case asada, just follow these simple steps:

Can You Cook Carne Asada On A Griddle? 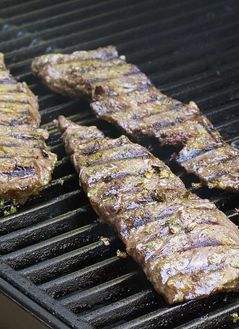 Traditional carne asada is cooked over high flames, but if you don’t have access to an outside barbeque, a great (some would say even superior) alternative is your trusted stovetop griddle. The benefits? Let’s take a look…

How to Cook Carne Asada On A Griddle

If this is your first-time cooking carne asada on a griddle, don’t be nervous. There’s nothing complicated or difficult about the process, and you’ll probably find it a lot easier and simpler than you imagined. If you’re still unsure, just take a griddle, a stovetop, a spatula, and these super- easy instructions.

The cardinal sin when it comes to cooking carne asada in a griddle is using too low a temperature. The meat needs exposure to a high heat to get that gorgeous sear to its exterior, and that juicy, melt-in-the-mouth moistness to its interior. Preheat the griddle on a high heat and let it get smoking hot before adding the steak (test out the heat by flicking a drop of water onto the griddle’s surface – if it sizzles and evaporates immediately, you’re good to go). Turn down the heat slightly when you add the meat, but don’t go any lower than a medium-high.

What Temperature Should Carne Asada Be?

A thermometer is a great way of guaranteeing flawless results when it comes to cooking meat. Once you think the steak is almost done, pop a meat thermometer into its thickest part. Once the very center of the steak registers 110°F, remove it from the heat. The carryover cooking will then take it to the requisite 125 to 130°F for a medium rare steak. If you prefer a medium steak, bring it to 125 °F on the heat- the carryover cooking in this instance will take it to around 140°F.

For the most delicious carne asada you’ll ever taste, try this delicious recipe. 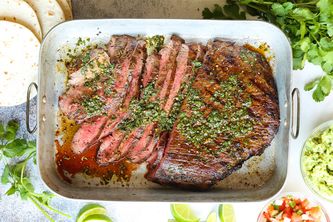 If you’re looking for some new ways to serve carne asada, why not give some of these popular serving suggestions a try?

Top Tips For Cooking Carne Asada On A Griddle

Need a recap on some of the best tips for cooking carne asada on a griddle? Then here you go…